The X300V is a compact WeaponLight for pistols and long guns, featuring a high-output white-light and infrared LED in one sealed unit. In white-light mode, its recoil-proof LED generates a versatile 350-lumen tactical beam with plenty of reach, enough surround light to accommodate peripheral vision and enough output to temporarily overwhelm the dark-adapted vision of an aggressor. In infrared mode, the 120-milliwatt LED produces a beam that’s invisible to the naked eye for use on stealth operations involving night vision devices — no filter required. Switching between the two modes is achieved via a no-look, self-locking selector ring, even on the fly. The X300V can be attached to a pistol or a long gun since its Rail-Lock ® system permits rapid attachment to and removal from either Universal or Picatinny rails. Ambidextrous push/toggle switching on the rear of the light provides one-finger control for momentary- or constant-on operation; optional DG grip switches (for pistols) and a pressure-pad tape switch (for long guns) permit activation of the light without altering your grip on the weapon. Constructed of aerospace aluminum, Hard Anodized with a Mil-Spec finish, and O-ring and gasket sealed to keep out the elements, the X300V thrives in combat-like conditions — on both handguns and long guns.

Add your review
0 stars based on 0 reviews 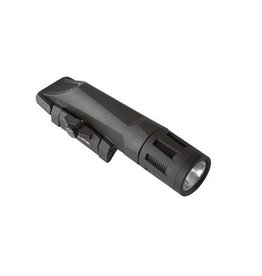 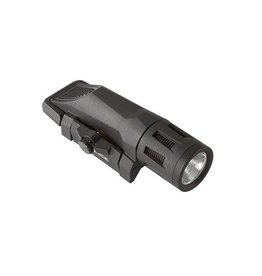